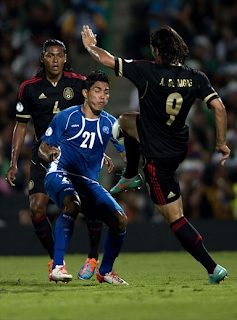 Costa Rica greeted Guyana as the paid a visit to San Jose and its artifical playing surface.  Costa Rica needed a win to secure advancement to the final phase of qualifying.  Tico forward Alvaro Saborio scuffed a shot, but the ball rolled into Randall Brenes's path for a finish and an early 1-0 lead.  It would be that kind of night for Guyana.  Four minutes later, Cristian Gamboa sent a wonder strike into the side netting from seventeen yards to give the Ticos a 2-0 lead.  The Ticos led by that same score at the end of the half.

A poor Saborio cross three minutes into the half was flicked on by Guyana defender Charles Pollard, turning it into a perfect header opportunity for Brenes, who converted for 3-0.  Walter Moore sent off for second yellow in minute 50, leaving Guyana with ten men and facing a penalty kick.  Saborio converted for 4-0.  The fifth goal came off an unlucky deflection with the foot of a Guyanese defender block a cross only to put it into his own net.  The sixth goal came off a Guyana clearance that was blocked on the six-yard box and someone went into the roof of the net.  The seventh came when Saborio headed a ball down off a cross that beat the goalkeeper on a bounce.  Saborio missed a penalty kick for his hat trick chance seven minutes from time.  Costa Rica win 7-0 and advance to the CONCACAF Fourth Round.

Torreon was the site for Mexico's final home game of the CONCACAF Third Round as they took on El Salvador.  La Selecta needed to win in Mexico and then hope for a Costa Rica loss, or alternatively they needed a three-goal win in Mexico paired with a Costa Rica draw.  Neither scenario seemed likely, but La Selecta held tough in the first half.  In the only chance of the first period, Mexican attacking midfielder Angel Reyna missed on an open goal to keep the scoreline inert at zero goals apiece at the break.

El Salvador come out of the break knowing that Costa Rica had taken a huge lead and that for all intents and puroposes their tournament would end in forty-five minutes.  The reshuffled Mexico lineup began to find its rhythm in the second frame.  Andres Guardado floated an early chip attempt just wide of goal.  Midway through the period, Oribe Peralta, playing on his club pitch, opened the scoring after a Reyna shot drew a save from goalkeeper Dagoberto Portillo.  Peralta was there to tap home the rebound.  Hector Herrera nearly had a second goal for Mexico, but his shot from twenty yards clanged the crossbar.  With a quarter hour remaining, Portiloo had a flying save to deny Reyna.  However, Mexico killed off the game with five minutes left when an Elias Hernandez cross was kneed home by Javier Hernandez, as he had gotten goal side of center back Steve Purdy to free up space.  Mexico win 2-0.  El Salvador are eliminated from Brasil 2014.